Hopeful for the New Beginning

“I like to write poems but I was unable as it reminded me about my past life. But now I'm hopeful and excited to write about my new beginning.” 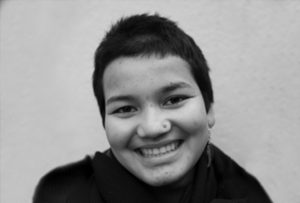 15-year-old Sushma (Pseudonym) was born in Doti. She faced a lot of hardship as a child as her mother tragically passed away and her father remarried. Unfortunately, her stepmother really despised her. At a tender age where a child needs a mother’s love and care, she instead received hatred and abuse from her stepmother. To make matters worse, her family didn’t support her studies, so she used to work and manage the fund for her study independently.

She was a bright student and engaged in various extra-curricular activities like volleyball, kabaddi, and debates. She used to write and recite poems but fell out of it after everything that happened in her life. However, all of this made her stepmother resent her further with envy and hatred. Her stepmother cynically tried to not let her study by burdening her with household and agricultural works. She also proposed a marriage against her will. Sushma denied the marriage, and the boy with whom she was proposed to marry, assaulted her sexually. She contacted the local government official and was rescued by one of the organizations working against gender-based violence. Sushma was accommodated in a shelter home afterward, but her condition started deteriorating to the point where she even tried to take her own life.

In the meantime, Sushma’s condition came to notice of KOSHISH. The team of KOSHISH provided her with mental health and psychosocial support and care. She started getting involved in therapeutic and recreational activities. She received counseling and regular follow-up services. Sushma started smiling again!

During a conversation with the psychologist of KOSHISH, she shared that she has fond memories with the staff of KOSHISH and stated: “I like to write poems but I was unable because it reminded me about my past life. But now I am hopeful and excited to write about my new beginning. I want to continue my study and work for the rights of women.”