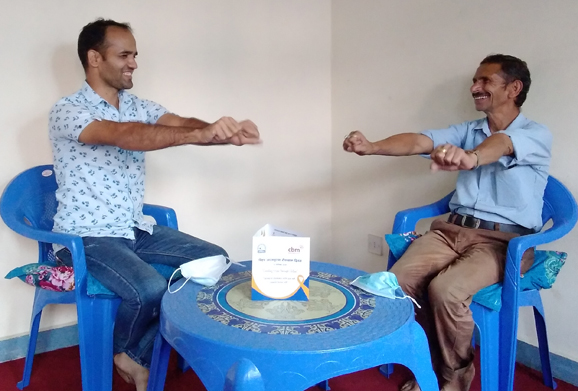 A suicide survivor: coming together to raise awareness

Balkrishna, aged 50, lives in Pokhara with his family. He lost his beloved wife due to COVID-19 infection during the second wave of the pandemic. Due to this mishap, he experienced distress, anxiousness, and feelings of isolation. One day, he attempted suicide by poisoning himself. When his younger son found him unconscious, he immediately took him to a local hospital, where he survived after receiving treatment for 15 days. After the recovery, he returned home but his mental health condition had no progress.

Balkrishna’s condition came to the notice of KOSHISH through a local government representative. The counselor visited him and started providing him psychosocial support where he could open up and share his feelings. The counselor also talked with his family and neighbors and linked him with the local government for the basic need support. The counselor prepared him to practice some therapeutic skills and muscle relaxation techniques to help relieve his stress. The psychosocial support provided helped him recover which eventually contributed to finding meaning in his life.

Balkrishna started expressing his desire to live more and showed interest in advocating and sharing his personal experience to inspire others with suicidal thoughts and ideation. He shared, “When I thought the time I was in the crisis, I had no place to share my feelings. I was mostly occupied with negative thoughts towards my life which led me to attempt suicide.” He added, “Now, I feel fortunate that I am alive and KOSHISH enabled me to retrieve my happiness in wanting to live life.”

He prepared himself to share his positive story in an event during World Suicide Prevention Day in 2021. His sharing was effective in sensitizing the participants in the event. Since then, he has started contributing to the awareness programs related to suicide prevention at the community level and inspiring people to live a better life socially.