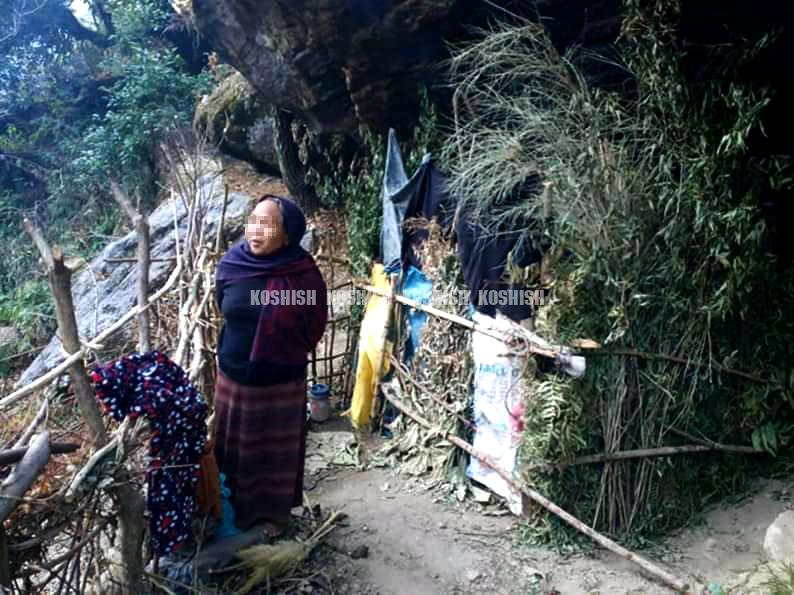 Phulmaya (pseudonym) was living happily looking after both her children. Her husband was abroad for employment. Everything was going well until a day when a stranger raped her in the woods. When she cried for help, she was blamed for her fault instead of getting the support of the community, and eventually, she was unaccepted by society. After few years, her husband returned and he also started to abuse her instead of supporting her. She suffered from domestic violence every day.
The situation led her to develop a severe mental health condition, and the villagers chased her far away from the village. She was forced to live in the streets where she encountered sexual violence multiple times. Then, she started hiding in a cave nearby where she could save herself.
For the past 15 years, Phulmaya lived in a cave near the jungle and far from society. One of the Community Psychosocial Worker (CPSW) of KOSHISH working for the Community Mental Health Program in association with CBM came to know about her and visited her for five continuous follow-ups. During these visits she also took the Ward Chairperson along with her.
Phulmaya was rescued by KOSHISH in coordination with the Ward Office of Syange, Marsyangadi Rural Municipality of Lamjung district. She received treatment and support from the Transit Care Centre of KOSHISH for seven months, where she was provided psychological support, treatment, and care. Likewise, she was also involved in therapeutic activities for her recovery. She was made aware of the issue and was given psychoeducation as well.
Today, she has been reintegrated into society. The Ward Office of the Rural Municipality has taken full responsibility of her and started to build a house for her. The CPSW of KOSHISH provided psycho-education to the community people to eradicate their misconceptions regarding the mental health conditions, and they have now accepted her as a part of their society. Phulmaya remembers her past as a nightmare. She says compared to her past, and this life is a heaven for her, a social heaven.

Healing from wounds in the heart