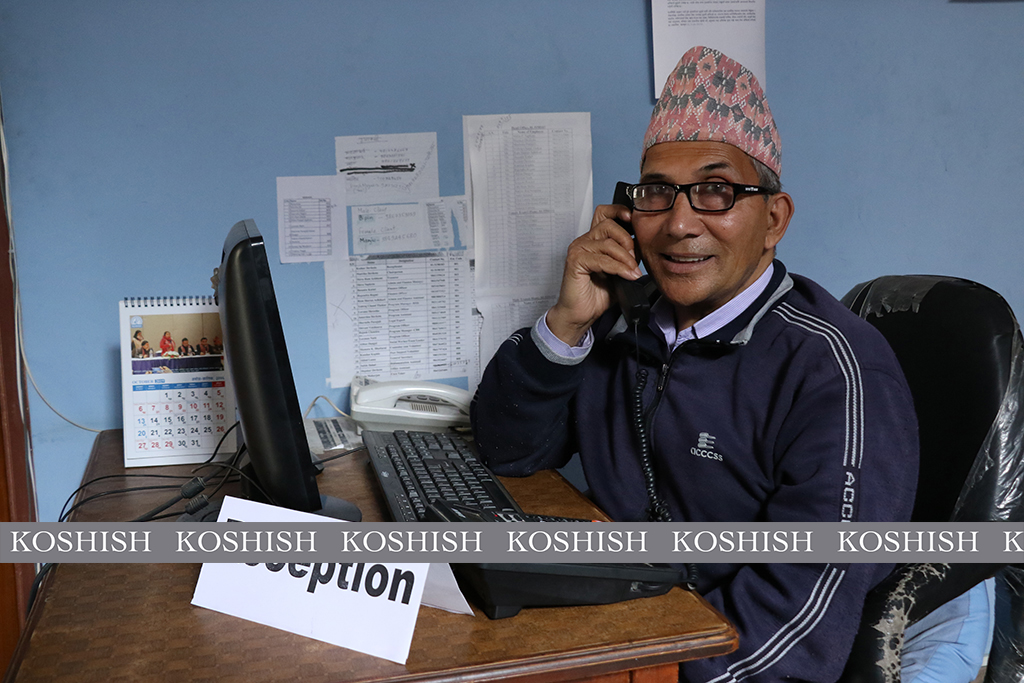 I am a receptionist at KOSHISH and have a normal regular life just as others. I am deeply involved in music and I like to compose Nepali songs and music. I am well-kept and I love to meet people and make friends specially those who have music as passion.  I am active member of Facebook and I like to socialize. I am very happy today and I thank my stars for getting the life I have today. I have to take regular medicines for the mental health issues and also I have to take an injection every month. Honestly, I do not feel that I need to take either medicines or the injection. But the KOSHISH staff persuades me to take regular medicines and injections. I do not want to hurt them that`s why I take medicines and injections.

However, my life was not like this earlier. When I was very young my family died in the Tuberculosis epidemic. Even I suffered tuberculosis but I survived after undergoing an operation in the UMN hospital in Tansen, Palpa. A foreign surgeon from Sweden adopted me and put in the prestigious school, the Gandaki boarding school in Pokhara, Nepal.  I studied in that school up to class 10and then came to Kathmandu. In Kathmandu I enrolled for the secretarial course for two years. After finishing the secretarial course, I took up jobs here and there and rented a room to stay.

One day my room was broken in, by some hooligans who took away all my money and belongings leaving me in the lurch. This incident affected me very badly and I could not keep my job. I had no money, no clothes, no shelter and I landed in the streets. I survived in streets for the 17 years.  I was on the mercy of the passer by and many a times I had to stay without food for days on end.

KOSHISH rescued me with the assistance of police as I was very aggressive and reluctant to budge from my position. I did not want to come with the KOSHISH staff. Finally, the trained rescuers managed to rescue me and brought me to the transit center of KOSHISH.  Initially, I was a loner at the transit home and refused to interact with anyone.  At the transit center I was given counseling, medicines and put into card and box making. I was also given computer training.  Slowly I recovered enough to lead a normal life.

Today, I am in a much better condition than my previous life.  I have got everything at KOSHISH, I have not only the intervention but, I have been given a job also. In this way I feel that KOSHISH is everything for me.  Matrika Devkota is now my father and I am his son. Unfortunately, though there are international and domestic laws and policies for the protection and inclusion of the persons like me, still people like me have no substantial support and sustenance. I was lucky I got rescued by KOSHISH but there are many more like me who are waging a lonely battle for the survival.

Acceptance and support: Giving confidence to start a new chapter in life

A journey from abandoned to abundant life