“We all thought Shilu will die. She was weak and unable to walk. Her life has transformed thanks to KOSHISH.” 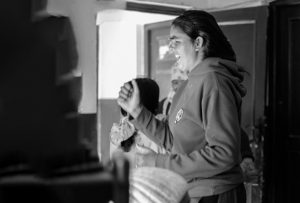 Shilu Bhatta (Pseudonym), a 27-year-old woman of Baitadi was found in poor mental and physical health. Her family members and neighbors shared that they were unaware of her condition. They took her to traditional healers for treatment, and that ended up further deteriorating her mental state. KOSHISH knew about her condition through a representative of the local level government. KOSHISH immediately deployed a team to provide her with needful mental health care and support.

She received psychosocial support, along with proper care and a nutritional diet. A few weeks later, her mental health, along with her physical health, started improving. She gained weight and was able to walk again. She really liked dancing, and she even started dancing during recreational activities facilitated by KOSHISH team. She was also helpful and friendly with other beneficiaries and staff of KOSHISH. After an improvement in her mental health condition, she was reintegrated back into her family. Her family members and neighbors were surprised for seeing her healthy. One of the neighbors said, “We all thought Shilu will die. She was weak and unable to walk. Her life has transformed thanks to KOSHISH.”